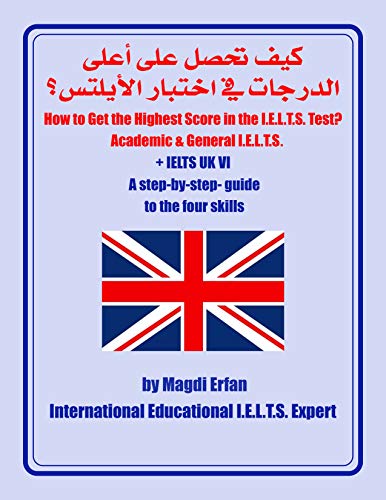 This book puts the learner on the right track to get the highest score in the test that made many people very tired and it saves your time to get the desired score from the first time. I have been teaching IELTS to a big number of people of all kinds, ages, social levels and nationalities and strange cases attracted my attention such as the following:
1-An engineer finished all immigration procedures to Canada and he wanted to get seven in the reading skill but he was getting less than seven all the time. His family felt very frustrated.
2-A student graduated from the high school. He tried to get 5 in the overall score to join the university. He had the test 12 times but he could not get that score.
3-Another female student tried to get 6 in the IELTS test to travel to Holland with her friends who got 6 in order to join the university there. After paying great efforts and severe depression, she got the desired score. As a result, her family was very happy as if she got the PhD.
4-Another student found a great chance to save one year at a college if he could get 5 in the overall in the IELTS test but he failed in that because his level in English was low. After little training, he got 5 and it was enough to save one year at college.
So, the IELTS test became as a terrifying lion!
The IELTS test is a placement test but it exceeds the other tests because of its accuracy and objectivity, so it is recognized all over the world. The IELTS test equals the TOEFL test but the latter is American while the former is British.
IELTS
International English Language Testing System
This test needs training to know the secretes of getting the highest score from the first time. Some candidates cannot get that training, so I decided to write this book to help you get these secretes that I got after many years of experience teaching IELTS, designing curricula, writing books and attending conferences.

In this book, I will handle each skill at a turn to offer magic solutions for each skill in order to reach the highest score in the shortest time and from the first test.
Note:
The difference between the academic and general IELTS tests is that the academic test is for joining universities and most universities require around 5 to 6 in the overall whereas if you want to have a master or PHD, so you need around 6 to 6.5 in the overall. The general test is for those who would like to immigrate to America, Canada, New Zealand or Australia… and you need to take 7 in the four skills and 7 in the overall. In fact, the general test is easier than the academic one.